Mr. Alison – The Dream Is On 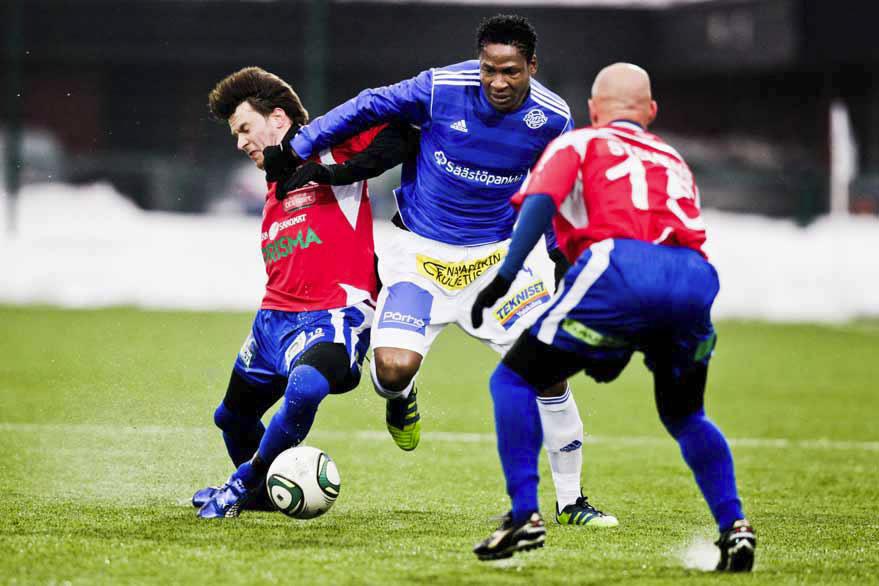 Finding a way to Europe to play professional football is a dream that so many African boys cherish when they go to sleep every night. For some it is a dream that never comes true, but for Ndukaku Alison the way to Europe seemed to be wide open as he shined at TopSpot’s talent tournament in Nigeria in the beginning of 2011.

The scouts liked the calm leadership he showed on the pitch. He guided his troops from the central defense and showed speed, strength and vision in his game. Mr. Alison’s European dream was coming true.

He arrived to Oulu, Finland in April 2011 to join the local team and unlike many other African players he adapted fast to the way of life in Finland and met the requirements of professional footballer’s life.

Unfortunately Nduka never got a proper chance to prove his worth in Finland during his first stay. The club was in a chaotic situation after been forced to relegate to second tier due to financial problems and Nduka was asked to find new opportunities elsewhere.

The European transfer window was already closed and there was no way to join any other Finnish team. It was time to take another big step for a countryside boy from very humble origins. It was time to go to Asia, to Thailand to be exact.

In Thailand Roi Et United FC were looking for a defender. Mr. Alison flew in on June 2011 and arrived just in time to make it to the second round of Thai Division 2.  He took his position next to a fellow Nigerian player Kennedy Ihenacho and Ghanian David Davidson, whom somebody might remember from KooTeePee.

The three musketeers led Roi Et United FC from victory to another, to win their own group and to enter the so called “Champions League” to fight for the promotion. The Thai football has sometimes more energy and fighting spirit than skill and intelligence however with 3 superior players and few good local players Roi Et United FC were the biggest  favourites to make it to Thai First Division.

That would have been too good story to be true. From a reject in Finland into a hero in Thailand. But of course; something happened in the first game that brought everything that had been built during the season crumbling down. The coach made a terrible error by substituting sixth foreigner (only five allowed at the same time) on in a game that would have otherwise been a clear victory. Because of this error the team was condemned to lose the match. Then in the following game they played badly and only got a draw. The team’s spirit started to sink and the way up seemed much more difficult than what it was in the beginning.

As you can guess Roi Et United FC didn’t make it to the First Division in the end. They are trying this year again and are currently on the top of the table in their own group. Kennedy and David continue to play for the club and hopefully this year the club’s dream will come true.

But one of the player is not there anymore. Mr. Alison has left the building. Might sound dramatic, but actually it doesn’t really bother him as he is chasing his own dream like the way it was planned in the first place. And he is doing alright!

The dream is on!

Ndukaku landed to the land of Santa Claus on a dark (what else?) February day. The management of RoPS from Rovaniemi saw his capabilities right away. He would form the solid defensive duo together with his old team mate Faith Friday. And when the season started in April we have learned to see how solid they actually are! Only 2 conceived goals in 6 matches means that RoPS is on the top spot of the table.

It is like year and a half before on a sandy pitch somewhere in Africa. Ndukaku leads the defense with his calm style of play and short passing while Faith does the most of the running, heading and kicking around.

The dream is on.