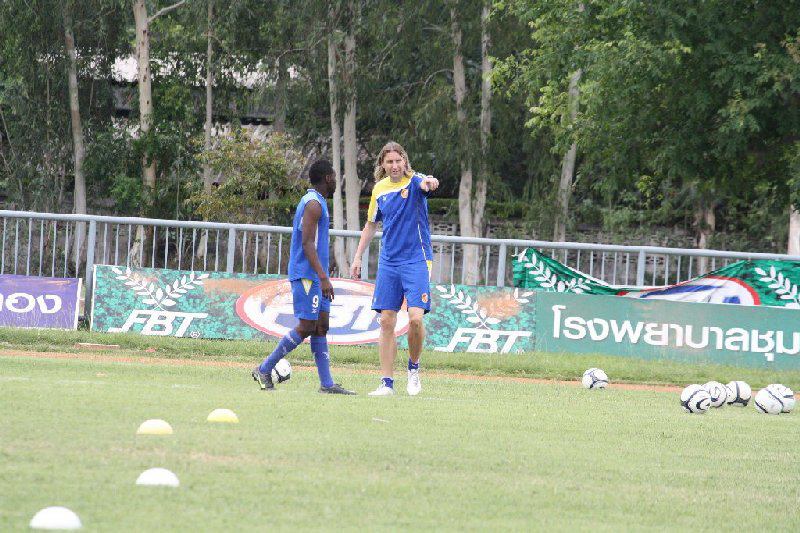 TopSpot’s Mika Lönnström has spent the recent months in Roi Et province in Eastern Thailand setting up facilities and organization for full scale youth academy together with Roi Et United FC staff and management. Mika, who holds a UEFA Pro Coaching License, is still in the beginning of his work, but already results can be seen.

“We are setting up the office for the academy and getting ready to start the first football schools for the local kids”, says Mika and continues: “Within 6 months time period we are planning to build an artificial turf just for the academy purposes. That will be excellent as the weather conditions can be rough during the rainy season and the natural grass pitches can convert into mud-pits over night.”

Academy will take in, accommodate, feed, educate and train up two groups of 20 boys. Other group will be between ages of 16-17 and the players of the younger group from 14 to 15 year old. The academy will be for the boys only in the beginning, but the football schools targeted for younger children will also take in girls. And who knows; maybe one day there will be a academy group for the girls too!

The football schools will be organized in partnership with the local schools from the province. The president of Roi Et United FC is very excited about the ongoing work: “I am excited to see the effect and impact we are going to have on our community. I think we are setting a prime example what a sports club can do for its’ community.”

Mika Lönnström will continue his work in Roi Et and he is very happy about the career decision he made: “Sometimes you just have to be bold enough to take a step away from the routines and old circles. In Finland many people are in so-called comfortzone and are never able to leave it. But challenging yourself every day is the only way of progressing and developing. I recommend taking a step towards unknown for everybody!”

TopSpot’s involvement and investment will increase as the time goes on. Also some of the most talented TopSpot’s Nigerian academy players will be able to change to Thailand’s more peaceful environment later on when everything is ready.