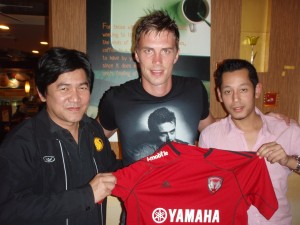 TopSpot’s newest client Toni Kallio signs for thai-football giants Muangthong United FC. Muangthong is Thailand’s title holder and will participate Asian Champions League qualifications in 2011. The club has risen to the top level of thai-football relatively fast. The biggest sports media company is behind the club which has boosted the fan base (and club’s bank account) significantly and the 25000 seater Yamaha Stadium in Bangkok is sold out many times during the season.

Toni Kallio and TopSpot are both pleased of the outcome of the contract negotiations and although the Thai Premier League is not widely known in Scandinavia and in other parts of Europe it is one of the most rapidly growing leagues in South East Asia. More people find their way on the stands each year attracting more sponsors and media. The level of football is rising each year and with signings like Toni Kallio Thai Premier League will attract even more quality players in the near future.

TopSpot hopes Toni’s pioneering work will not be left without a notice in Nordic countries where Asian leagues in general are not that highly rated. That is due to ignorancy as many of the leagues in Asia can compete with many European leagues on every level.

Together with Toni we will work hard that this signing will not be the last of a kind and we will see more Nordic players in Asia.

Toni’s comments on the website tomorrow after the training match.